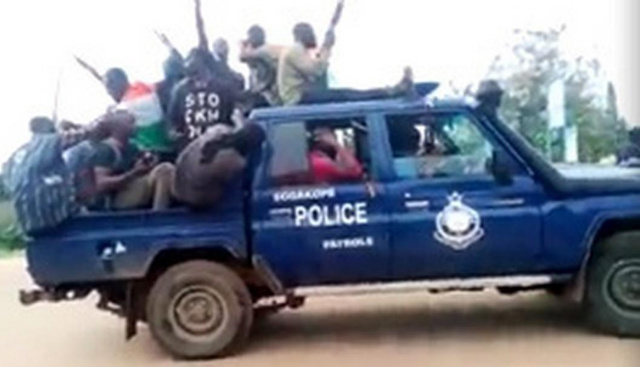 The Aveyime and Mepe police stations in the North Tongu District of the Volta Region were in the early hours of Friday, September 25, stormed by some armed members of an alleged secessionist group.

According to reports, the group forcibly took over both police stations simultaneously, broke into the police armoury and made away with all the weapons belonging to the police.

“They stripped naked the police officers on duty, took their weapons, and locked them in the cells before breaking into the armoury,” an eye witness stated.

In a viral video circulating on the net, the criminals were seen driving a police patrol vehicle after attacking the police station.

“We’re free…we’re free forever,” the group said in the video.

The group later raised the Western Togoland flag and joined their colleagues at the Aveyime Police Station in the police vehicle and injured an officer.

The group is said to number about 50.

There have been accusations and counter-accusations about who these people are and why the intelligence agencies could not foretell the incident. It is controversially speculated that national security operatives orchestrated the events in order to later send heavily armed security officers to Volta Region to intimidate voters. The secessionist groups have denied involvement in those attacks. Analysts have said that the prosecution of those arrested is the only way to settle the controversy.

In this article:Seccesionist, Western togoland