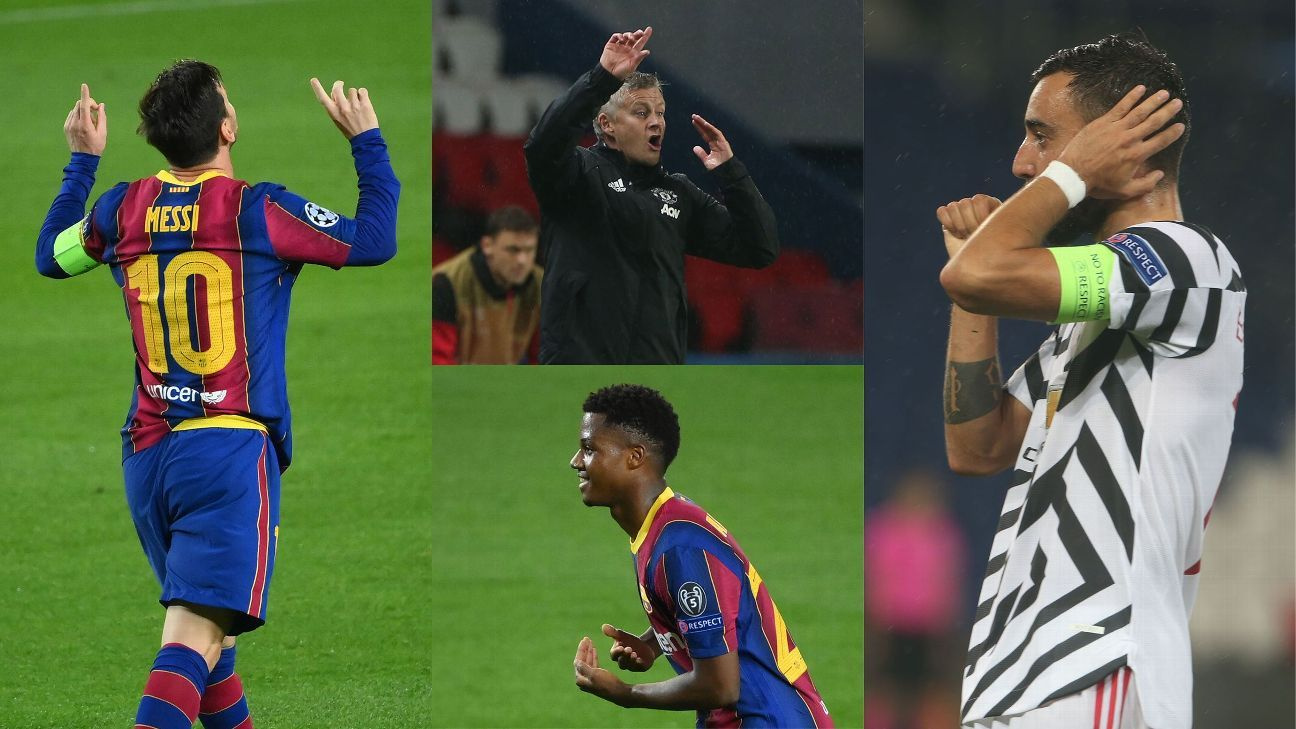 A storm of an opening night in the UEFA Champions League witnessed Manchester United whip PSG 2-1 in Paris, Barcelona stun Ferencvaros 5-1, Lazio tear Dortmund apart 3-1, Juventus run past Dynamo Kyiv 2-0 and Chelsea draw Sevilla 0-0. It was a massive action all around, and here are the best digits.

0-0 is not a portion for Chelsea as a scoreline these days, but in Frank Lampard‘s 62nd, the night was his first goalless draw as Chelsea manager.

Barcelona ‘ wonder boy’ Ansu Fati became the first player to score two UCL goals before turning 18. (He was ten days short of his 18th birthday when he scored against Ferencvaros!) In fact, when teenage mate Pedri scored the fourth, Barcelona became the first team in UCL history to have multiple 17-year-olds score in the same game.

Ronald Koeman became the fifth manager to take charge as many as six teams in UCL action when he led his Barcelona side out on Tuesday for the first time. The other four? Carlo Ancelotti (8), Claudio Ranieri (6), Jose Mourinho (6) and Rafael Benitez

The Sudden own goal by Anthony Martial‘s was the ninth by a Manchester United player in UCL – the most of any club in the competition’s history.

Manchester United has been victorious for a solid 10 consecutive in away games across all competitions for the first time in their history.

The previous record of 9 consecutive away wins were the first 9 away matches under Ole Gunnar Solskjaer.

What do that old and new record have in common? Both record-breaking matches were wonderfully against PSG in the UCL.

Manchester United’s first goal came from the spot. The only player from Europe’s top 5 leagues with more penalty kick goals in all competitions in 2020 than Bruno Fernandes‘ 11 is his countryman, Cristiano Ronaldo, who has scored 12.

The last time Paris Saint-Germain FC lost a home fixture in the UEFA Champions League CHAMPION LEAGUE group stage was 16 years ago, which was a 3-1 defeat to CSKA Moscow on December 7, 2004.

Barcelona join Bayern Munich as the only clubs in UCL history to score 5 or more goals in at least 20 different games. Bayern have done it in 21. Real Madrid are the only other club with at least 10 such games (10).

Prior to Akpa Akpro, the last Lazio player to score on his Champions League debut was their current coach Simone Inzaghi, 21 years ago (September 1999 against Maribor).

Barcelona have extended their unbeaten streak at home in the UCL to 37 games (33 wins); this was already longest in UCL history.

While Cristiano Ronaldo recuperates in quarantine, Lionel Messi scored Barcelona’s opener – from the spot – and in the process had yet another record-breaking night out on the pitch.

Lionel Messi’s 13 penalty kick goals are the second most in UCL history. Who has more, you ask? You already know — Cristiano Ronaldo, 17. Oh, and Robert Lewandowski is just behind Messi with 11.

This was Messi’s 28th UCL goal as Barcelona captain. No club captain has scored more in the competition. He broke a tie with Real Madrid great Raul on Tuesday. Alessandro Del Piero is third with 21.

Lionel Messi also extended his record for most opponents scored against in UCL history, with Ferencvaros his 38th. Cristiano Ronaldo and Raul are second, with 33.

In this article:UEFA Champion's League