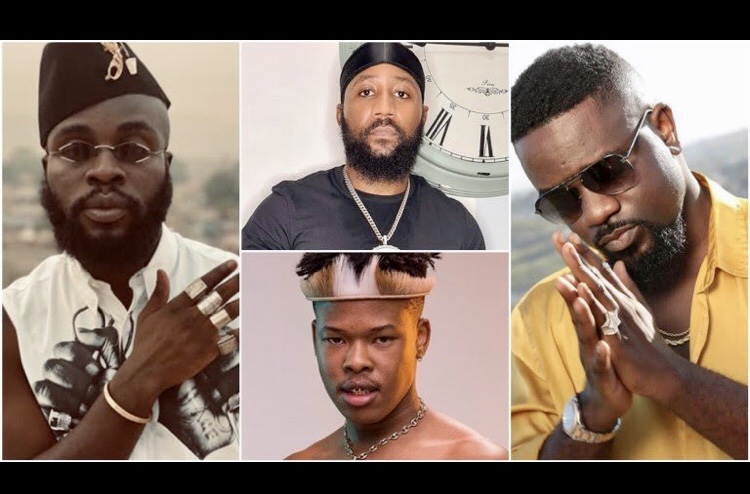 There have been lots of arguments about who is the Best Rapper in Africa. The 2020 Hip-hop Africa Top 5 African Rapper list released by the Ranker.com ends it all, the list shows who are the best rappers in Africa currently.

The list features rappers from all over the continent for their good contributions towards the growth of hip hop across Africa and the world.

Ranker is a digital media company located in Los Angeles and a Quantcast Top 50 site in the US. The site features polls on entertainment, brands, sports, food and culture. Ranker is reported to have over 40 million monthly unique visitors worldwide.

And this is a platform a Ghanaian rapper and Best International Flow Act, Sarkodie who raps in his native language is dominating. Sarkodie leads the list sitting at number 1 with over 400+ thumbs up, followed by another Ghanaian superstar M.anifest, who came second on the list, South African Nasty C came third, Casper Nyovest came fourth, also from South Africa and Nigerian M.I. Abaga sits at the fifth position.

Below is the full list of Africa’s Top 5 rappers by Ranker.com

Jude began his music career when he returned to Nigeria in 2003. Finding his place in an industry dominated by the likes of Modenine, Ruggedman and Eedris Abdulkareem, he quickly commenced the production of mixtapes with his friend Djinee. M.I’s popularity has grown quickly over the years in Nigeria as he has become one of the most critically acclaimed rap artists, and has recently been compared to other artists like Naeto C, el Dee, D’banj, 9ice and Mode 9. He was listed as the fourth most talented rapper in Nigeria by online music site Notjustok.com. The ranking didn’t sit well with M.I and he used the song NotJustOk/Savage (Track 5) on his 2016 released mix tape Illegal Music 3 to address the issue of him being compared to other Nigerian rap stars. He explicitly demanded that critics leave his name off any list and stop rating, ranking or criticizing music they didn’t help create just because the critic wants to gain more traction, followers and boost their ratings.

M.I’s role in the music industry cannot be underestimated. He has been responsible for bringing out many upcoming artistes such as Phyno, Wizkid, Vypa, Jesse Jagz, Ruby, Pype, Tone Ice Prince, Brymo and the latest is KhaliGraph Jones.

Refiloe Maele Phoolo, professionally known as Cassper Nyovest, is a South African rapper, songwriter, entrepreneur and record producer. He is regarded as one of the most successful artists in South Africa. In 2014, he established his own record label, Family Tree Records.

In 2008, Nyovest relocated to Johannesburg to pursue a career in music as a rapper and producer, after telling his parents he would rather chase his dream, which he believed would work out, rather than playing it safe and regretting it his whole life

Nyovest has been awarded and nominated for various music awards both locally and internationally. His first set of awards were in 2013 when he won four awards at the second edition of the South Africa Hip Hop Awards.  On 13 April, he received a nomination at the 12th Headies Award in Nigeria in the category of Best African Artiste alongside Nasty C, Sarkodie from Ghana, Kenyan group Sauti Sol, and Tanzanian singer Vanessa Mdee.

Nsikayesizwe David Ngcobo jr known professionally as Nasty C, is a South African rapper, songwriter and record producer. After releasing two mixtapes and two EP, Ngcobo released his critically acclaimed debut album Bad Hair (2016), and Strings and Bling (2018) which was associated and supported by his first tour, The Ivyson Tour.

He was the youngest recipient for an award at the 2015 South African Hip Hop Awards, namely the Best Freshman Award.

In March 2020, Billboard reported that Nasty C signed a joint venture deal with Def Jam Records, with the release of single “There They Go” as his debut under the label. In April 2020, Nasty C released the visual EP Lost Files, with the songs presented in performance clips on YouTube.

Over the years, M.anifest has been involved in various projects and tours. He was prominently featured on five songs on the Rocket Juice & the Moon album that was a collaborative effort from Tony Allen, Damon Albarn and Flea. He has also released four formidable solo efforts and was named by the Guardian (U.K) as the foremost rapper on the continent.

M.anifest’s creativity and entrepreneurial bent has also meant that he is a much sought after public speaker. He is a co-founder of Culture Forward; a new space and fund committed to making bets and growing progressive creative projects.  He has had artist residencies and given lectures in St Lawrence University (NY), University of Ghana, and spoken to several classes in Hamline University, Macalester College (his Alma Mater), Penumbra Theatre’s Summer Arts institute, and Ashesi University to name a few.

Michael Owusu Addo, known professionally as Sarkodie is a Ghanaian rapper from Tema, Ghana. His contributions to the Ghanaian music industry have earned him numerous accolades, including the Vodafone Ghana Music Award for Artiste of the Decade.

He was announced the first winner of BET’s Best International Flow act at the 2019 BET Hip Hop Awards making it two BET awards to his credit. Currently, Sarkodie is at #234 out of 501 position of The Greatest Rappers Of all time, #107 out of 117 of who’s the most famous rapper in 2020 ranked by World Ranker community, competing with world best rappers worldwide.