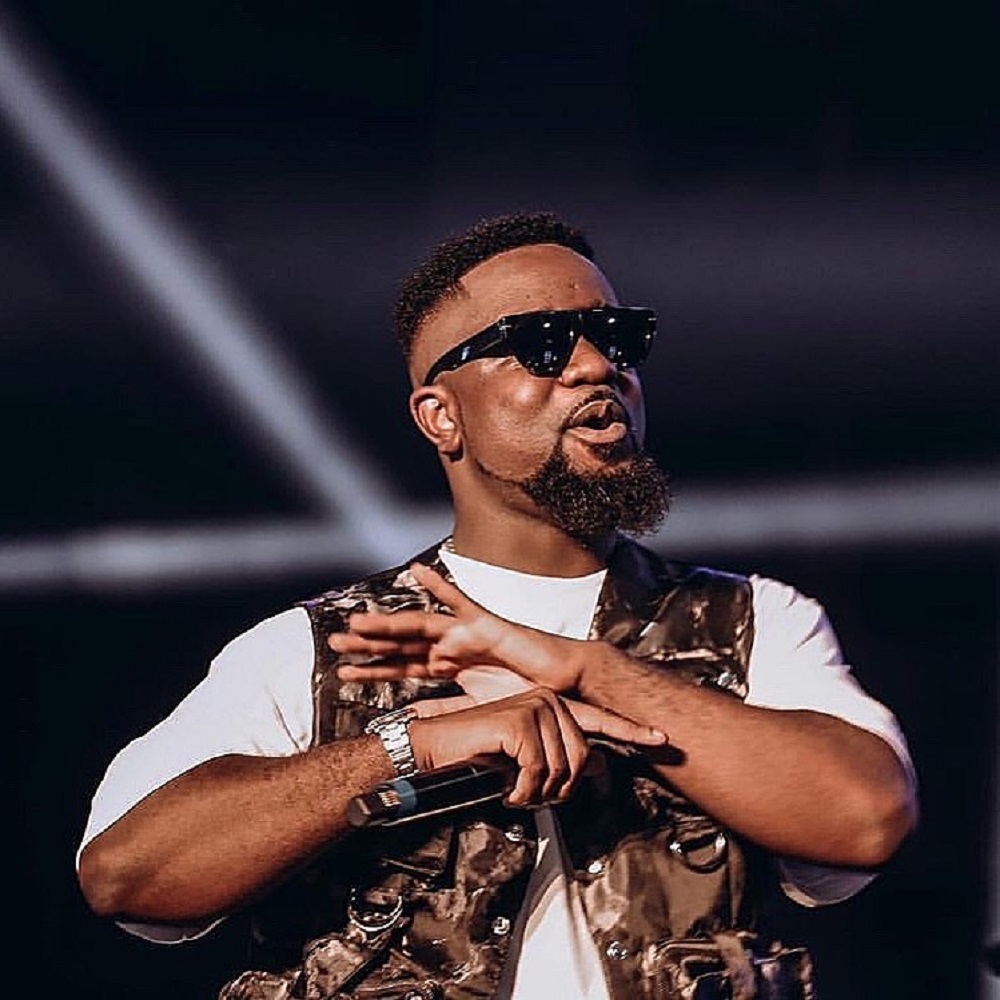 Michael Owusu Addo, known professionally as Sarkodie, is a Ghanaian rapper and entrepreneur from Tema.[3] His contributions to the Ghanaian music industry have earned him numerous Awards, including the Vodafone Ghana Music Award for Artiste of the Decade. He was announced the very first winner of BET’s Best International Flow act at the 2019 BET Hip Hop Awards. He is also considered one of the major proponents of the Azonto genre and dance.

proponents of the Azonto genre and dance.

Sarkodie was born and raised in Tema and is the fourth born of five children. He attended Tema Methodist Day Senior High School and proceeded to IPMC, where he earned a degree in graphic design. Sarkodie began his music career as an underground rapper, participating in Adom FM’s popular rap competition Kasahare Level. He met his former manager Duncan Williams of Duncwills Entertainment while participating in the aforementioned competition. He also met musicians Edem and Castro, who introduced him to Hammer of The Last Two, an established record producer. Impressed by his rap flows, Hammer allowed Sarkodie to record two tracks for his album Volta Regime.

Following his collaboration with Hammer, Sarkodie recorded his debut album Makye. Its production was primarily handled by Killbeatz and Jayso. The album features guest appearances from Kwaw Kese, J-Town, Sway and Paedae of R2Bees. Makye received positive reviews from critics and fans. It was supported by a concert held at Holy City Gardens in Accra. On 16 September 2009, Sarkodie performed alongside Busta Rhymes at the Busta Rhymes Live in Ghana concert. In 2010, his “Push” and “Baby” songs were ranked ninth and thirteenth on Joy FM‘s Top 50 songs of 2009, respectively. The album’s lead single “Baby” became an instant hit and gave Sarkodie exposure.

Sarkodie’s second studio album Rapperholic was released in 2012. It features guest appearances from Efya, Chidynma, Mugeez of R2Bees, Obrafour, Jayso and EL. The album was supported by five singles: “Good Bye”, “One Time For Your Mind”, “You Go Kill Me”, “Living Legend”, and “Onyame Nhyira”. It received positive reviews from music critics. Sarkodie went on a nationwide tour to support the album. Rapperholic earned Sarkodie his first BET nomination and subsequent win. Sarkodie was also featured on the BET Hip Hop Awards cypher alongside Talib Kweli, Jean Grae and Ab-Soul. He was the only African act featured on the cypher.

On 7 July 2012, Sarkodie kicked off his tour of Canada. He toured the United States in August 2012, performing in cities and states such as New York City, Ohio, New Jersey, Maryland, Atlanta, Chicago, Texas and Massachusetts. After releasing Rapperholic, Sarkodie embarked on a tour to promote the album. On 27 August 2012, he performed alongside R2Bees, Fally Ipupa and Iyanya at the Africa Unplugged Music Festival. In 2012, Sarkodie performed “How Low” with Ludacris at the 020 Live concert.

Sarkodie released the official remix of “Adonai”. It features vocals from Castro and appeared on Capital Xtra‘s list of the Top 35 Afrobeats Songs. Sarkodie launched the Sarkcess Music record label in 2014. As part of the launch, he premiered the video for “Adonai” (Remix) and “Special Someone”. Sarkodie also released the songs “Megye Wo Girl”, “Love Rocks”, “Chingum”, and “Whine Fi Me” under the label.

On 3 May 2014, Sarkodie performed at the 15th edition of the Ghana Music Awards. On 7 June 2014, he joined Miguel on stage to perform the latter’s single “How Many Drinks?” at the MTV Africa Music Awards.[19] In June 2014, Sarkodie collaborated with Mi Casa, Lola Rae, Davido, Diamond Platnumz and Tiwa Savage to record “Africa Rising”, a song for DSTV‘s campaign of the same name. The campaign was designed to inspire Africans to partake in community-based social investment projects. The music video for “Africa Rising” was released on June 24, 2014. It was shot and directed by South African production house Callback Dream.

On 10 June 2015, Sarkodie released the Ace Hood-assisted “New Guy“. It was released for digital consumption on 10 June 2015 through Sarkcess Music and Ivy League Records. Written by the two artists and produced by CedSolo, “New Guy” is an African hip hop and hip hop song that contains alternating rap verses, while its lyrics deal with Sarkodie’s desire and motivation for success. Development for “New Guy” began in early 2015 when Sarkodie paid a total of $25,000 to cover the production fees associated with the recording. He also wanted Ace Hood to appear on the track because he considered him “one of the world’s most powerful rappers”.

On 12 September 2015, Sarkodie released Mary, a live album named after his grandmother who died in 2012.“Mewu” was released as the lead single from the album two months prior.An autograph session for the album was held at the West Hills Mall in Accra. Sarkodie sold nearly 4,000 copies of the album on the first day of its release. In February 2016, he spoke to a group of Harvard Business School students. Themed “The Art of the Hustle”, his speech was primarily about the challenges associated with being an African musician. Sarkodie also performed at the event following his speech.

Sarkodie held the fourth edition of his Rapperholic concert on Christmas Day. Tickets for the event sold out within 72 hours of its release. The concert featured additional performances from Fuse ODG, R2Bees, Wizkid, Samini, VVIP, Efya and Shatta Wale. On 11 March 2016, Sarkodie performed with the music band The Composers at the O2‘s Indigo venue; the event was hosted by DJ Abrantee.

Sarkodie released his debut extended play Alpha in June 2019. The 6-track EP features guest appearances from Joey B and Ebony Reigns. Sarkodie teased his collaboration with Reigns during the Ebony Reigns concert, which commemorated the late singer. He released his fifth studio album Black Love on December 20, 2019. It features guest artist such as Mr Eazi, Efya, Donae’o, Idris Elba, Stonebwoy, Tekno, Maleek Berry, King Promise and Kizz Daniel. The album was supported by the previously released singles “Party & Bullshit”, “Saara”, “Do You” and “Can’t Let Go”. In an interview with OkayAfrica in November, Sarkodie said the album explores themes of black love and relationships.

Sarkodie often raps in his native language Twi and is considered a “multifaceted rapper” due to the various musical styles he possesses. Sarkodie is often named as one of Africa’s greatest hip hop artists. MTV Base ranked him sixth on its list of the Hottest African MCs in 2014. In 2013, Lynx TV ranked him first on its list of the “Top 10 Ghanaian Rappers of All Time”. In 2015, AfricaRanking.com ranked him third on its list of the “Top 10 African Rappers of 2015”. In 2015, The Guardian listed him as one of its top five hip hop acts on the African continent. He was ranked 8th on Forbes and Channel O’s 2013 and 2015 list of the Top 10 Richest/Bankable African Artistes.

On July 13, 2013, Sarkodie launched The Sarkodie Foundation, a non-profit dedicated to supporting underprivileged children. He made generous donations to the Royal Seed Home Orphanage in Kasoa. On December 25, 2014, The Sarkodie Foundation embarked on a feed the kids’ campaign in Tema, where they provided thousands of kids with eight sacks of rice, yoghurt and beverage cans. They also gave away school bags, water bottles, hats and other items. Roshi Motman, the CEO of Tigo Telecommunications, was also in attendance to support the campaign.

Sarkodie owns the Sark by Yas clothing line, which was launched on April 27, 2013. The clothing line has accessories for men, women and children. In 2012, he was officially unveiled as the Brand Ambassador for Samsung Electronics at the University of Ghana, Legon. As part of the event, Samsung unveiled the Samsung Galaxy Pocket and Chief Hero Phones that had customized wallpapers of Sarkodie and his signature; users had the opportunity to download exclusive tracks of Sarkodie.He also launched the Obidi Chief headphones and signed an endorsement deal with FanMilk Ghana in 2013.Sarkodie is currently in partnership with Tigo Telecommunications Ghana, a brand that sponsored his 2013 Rapperholic tour. On 30 October 2019, he was appointed as an ambassador for the Year of Return campaign; the honour was conferred on him at the Creative Arts Industry Forum.

Sarkodie married Tracy in a private wedding ceremony held in Tema on 17 July 2018. They have a daughter, Adalyn Owusu Addo.

Main article: List of awards and nominations received by Sarkodie

On the 28th of September, 2020, the Kumasi based multi-talented young versatile rapper, Cantus Black along with his fan base called ‘Team Black‘ has...