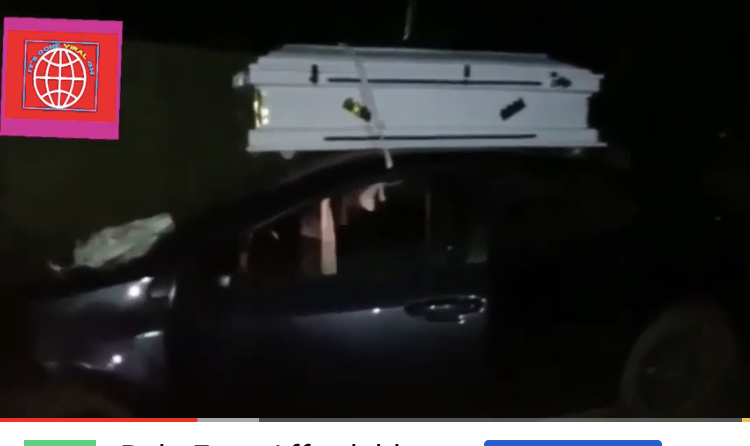 Watch Video Of A Young Man Caught Carrying White Coffin At Dawn In Kumasi. A new video trending  on social media saws  a young man in the Ashanti Region Carrying a white coffin at dawn.

Information reaching Sarknation.com is that ,the incident is said to have occurred at Abuakwa-Manhyia to be precise saw the young man who is believed to be in his early twenties going around with the coffin.

Those who saw him approached him to find out why and where he was going carrying the coffin at that hour.

An eyewitness at the scene who gave his name as Kojo Tawia reveals that he was not asleep as 1am and that lead him to see the young man carrying  the white coffin on top of a Toyota Corolla heading towards the T-junction in the community.

He continued that he approached the young man when he saw that he was trying to offload the coffin and he asked him why he was carrying such a crucial material in the middle of the night but the young man was struggling to answer and gave him flimsy  excuses.

Kojo Tawia went on to say that the young man told him the coffin belonged to the priest of Abuakwa-Manhyia but the said priest denied knowledge of the coffin when he was called to the scene.

His actions angered the youth of the community who gave him some beatings of his life for trying to use some residents for his alleged money rituals.

However, it’s not yet  confirmed that he was going to do sakawa(blood money) but looking at the current happenings and some videos sighted on social media, people just came to a conclusion that he was a money ritualist.